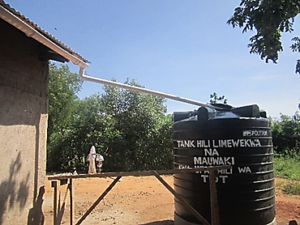 Local Dispensaries operate under difficult conditions in Maswa district, Simiyu Region. TDT received an application from local NGO Mauwaki, for three water tanks at three dispensaries in Maswa District. Together with Local representative Ezekiel Kassanga, an amount of £820 was agreed for each water tank and fixings. Further to a visit from a Project Officer in July 2016, TDT agreed to fund the water tank for Bushashi dispensary and this was completed in November 2016. TDT also facilitated funding from the Methodist Central Hall which was used to provide a second water tank at Kadoto Dispensary completed in April 2017.

IMPACT: There are 38 Dispensaries in Maswa District serving several villages each and are the first point of call for local people. Water is needed for washing, cleaning equipment, washing clothes, drinking and in deliveries. In Bushashi for instance the medical officer was travelling 1 and a half kilometres one way to get water for her work. The water tanks make this work easier and help towards more hygienic and better working conditions. Julian Marcus was able to receive the gratitude of Mary Magazi, the Medical Officer in Bushashi Dispensary in his visit in January 2017. During this visit, he also recommended that the funding for the third Dispensary at Kinambigilu should be delayed until further refurbishment had taken place at that Dispensary.

Tanzanian Affairs is an influential news and current affairs magazine, published first in December 1975. It is issued three times a year by the Britain Tanzania Society, and circulated to its members.
© 2020 Tanzania Development Trust | Terms - Privacy Policy | Admin