Tanzania is a place of natural beauty, charming diversity, and enthralling cultural history, far more than the issues it faces.

Tanzania is a huge country. You can fit all of France, Belgium, Holland, Denmark, the UK and Ireland into it. The largest urban area is Dar es Salaam on the coast; Dodoma, the capital, is a rapidly growing city nearer to the geographical centre of the country. Most people (76%) live rurally. It’s a huge task for the government to bring clean water, healthcare, education and job opportunities to scattered villages far from any tarred road. 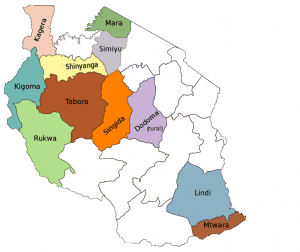 And the population profile brings fresh challenges: 61% of Tanzanians are under 24, whereas in Britain it’s 30%. Life expectancy has risen to 61 years, compared with about 81 in the UK. Two of the biggest problems are access to clean water and hygienic toilets. Less than half of rural Tanzanians have reasonable access to an improved water source, and only 7% have improved sanitation.

If you’d like to keep up with more news on Tanzanian affairs, you can read bulletins at Britain Tanzania Society’s website.

With our representatives on the ground, we work in areas not usually served by bigger NGOs. The regions of Tanzania we work in include Dodoma rural, Kagera, Kigoma, Lindi, Mara, Mtwara, Rukwa, Singida, Shinyanga, and Simiyu.

Tanzania has a rich history, and has long been associated with spices through its islands of Zanzibar, Pemba and Mafia.

Today, Tanzania is a country of immense diversity. It has to its name Mount Kilimanjaro and Lake Tanganyika – the highest and lowest points in Africa, Lake Victoria – the world’s largest tropical lake, the Ngorongoro crater – the world’s largest inactive volcanic caldera, seven UNESCO World Heritage Sites, the famous Serengeti, 16 national parks and a land mass of which over a third is dedicated to protected areas of conservation.

There are 60 million people, 122 ethnic groups, 430 wild animal species, 168 districts and 2 major religions – all within a country larger than France, the Netherlands, Ireland, Belgium, Denmark and the UK combined.

Roam in the Wilderness

Tanganyika, translating as “roam in the wilderness”, has been home to a mix of cultures for thousands of years. The country was known as German East Africa from the 1880s until 1919 when it became a British mandate, serving as a military outpost during World War II, and ultimately becoming a British-controlled United Nations trust territory.

Tanganyika was not a colony; the British focused on their own post-war economic recovery, drawing wealth out of the region but not investing significantly in the lives of local people. When Tanganyika became one of the first African countries to gain independence in 1961, the new nation was embraced by its people.

Agriculture is vital to Tanzania’s economic stability; it currently accounts for nearly 40% of GDP and 85% of exports. Earnings from tourism are also important and, alongside foreign aid, account for the majority of the GDP. Given Tanzania’s macroeconomic stability, private sector development, natural beauty and appealing geographical location for tourism, the country holds real potential to move toward middle-income status.

United Nations data makes it clear, however, that recent growth has actually benefited very few. Income disparities are vast; developed urban regions may be growing richer, yet for Tanzania’s 85% rural population, extreme hunger and poverty remain widespread. The education system still does not ensure that all young people move into adulthood with the skills necessary to break the cycle of poverty.

Teachers are often absent, and only a quarter of students progress to secondary education. As is still the case all over the world, girls drop out far more often than boys. In 2010, a quarter of Tanzanian females aged 15-19 were either pregnant or teenage mothers. It is now illegal to deny these girls an education; nevertheless, many are still expelled or forced to leave.

The average Tanzanian currently earns less than $3 per day, and nearly half the population live on less than $1.25 per day. Progress is being made, however, on combatting some of Tanzania’s predominant issues. Health statistics from recent years are optimistic; even though health infrastructure is generally lacking, child mortality, malaria-caused deaths and HIV prevalence are all decreasing at hopeful rates. Female genital mutilation is now illegal and Tanzania has generally endorsed the key international women’s rights protection policies.

Unfortunately, even the most well-intentioned regulations are often violated in practice, particularly in isolated and unmonitored rural areas. Female genital mutilation is estimated to occur continually in over 10% of the country’s ethnic groups and, even though Tanzania’s Land Act of 1999 enables women to own land, traditional practices regarding marriage and inheritance, combined with a lack of awareness on how to enforce their rights, frequently bar women from their legal entitlement.

Domestic and sexual violence remain prevalent, and unreported and spousal rape is not regarded a criminal offence. National plans of action and reform have been proposed, yet insufficient funding and the absence of a women’s legal aid system has prevented significant progress being made.

In light of the United Nations Development Goals set at the turn of the century for 2015 evaluation, Tanzania has made notable progress; many goals have been successfully met – most importantly the reduction in rates of infant mortality, underweight children and HIV-affected youth, and the increase of girls in education.

Maternal mortality and low income rates that trap many in poverty, amongst other issues, certainly require progress. However, the country remains a popular visiting destination; the tourist figure reached over one million in 2013, placing Tanzania as one of Africa’s leading countries. Such data only reaffirms that Tanzania – a place of spectacular natural beauty, charming diversity and enthralling cultural history – is far more than the issues it faces.

Keep up-to-date with all of our latest news, projects, and events by signing up to our monthly newsletter! You can also be the first to hear about our updates for our shop!