Learn about our magazine.

Tanzanian Affairs is an influential news and current affairs magazine, issued three times a year by the Britain Tanzania Society, and circulated to its members.

Since its first issue in December 1975, Tanzanian Affairs has covered all main economic, political, social and other developments in Tanzania. It is also highly valued for its reviews of books and other publications relating to Tanzania.

Tanzanian Affairs attracts many influential writers. Its talented and experienced editorial team has been led since 1984 by David Brewin.

On the occasion of its 100th issue in September 2011, President Kikwete wrote a congratulatory message, which included the following:

“For us in Tanzania, it is another moment to thank you for the good work you have been doing over many years of telling the Tanzanian story. The “Tanzanian Affairs” Bulletin has been writing reports about Tanzania that are well researched and presented ‘without mixing fact and opinion’ as Mwalimu Julius Nyerere, the first President of Tanzania, said in 1994. You have done justice to your readers in Britain, Tanzania and elsewhere by being analytical and objective in your work.”

Tanzanian Affairs’ web site is a wonderful resource, containing not only up-to-date publications, but also a searchable database of most past issues, and PDF copies back to issue 1. 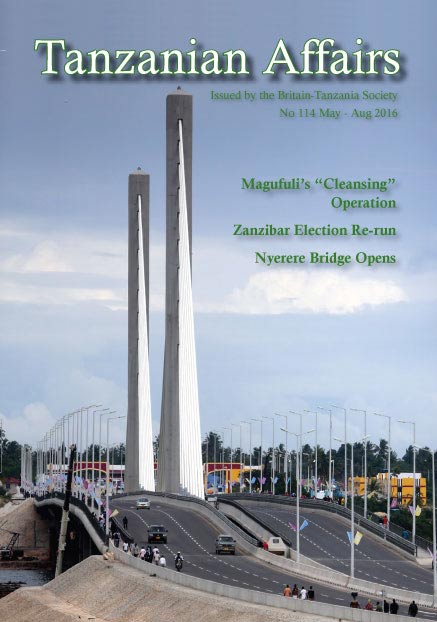